We can classify firms by the roles they play in a particular market. We will use an example from the book of Kotler and Keller to explain this: 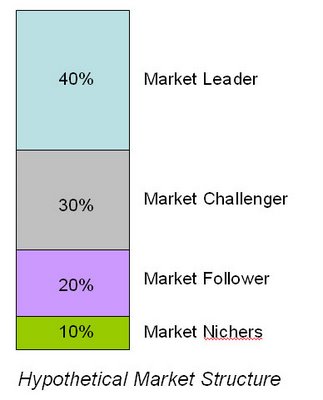 However, identifying a firm's role based on its market share can be erroneous. In the market of digital SLR – a kind of high-end camera preferred by professionals – top three spots are held by Canon, Nikon and Olympus respectively. Sony entered the market by acquiring the business of Konica-Minolta. Despite being a new entrant, this consumer electronics giant has assumed the role of a challenger. Leveraging its strong brand and extensive distribution channel, Sony aims to capture 20-25% of the market.

Olympus, on the other hand, makes smaller digital SLR with features appealing to casual users. It turns out that Olympus is the real nichers.