Korean dramas have been a hit in in the past few years. The good-looking actors and actresses, the beautiful sceneries and the ‘pure love’ storyline have all captured the hearts of the drama fans.

Not every thing is good though. The Land of the Morning Calm has its own dark side. Koreans are the angriest people in the world. According to The Exciting World of South Korean Protests, the country has a “national average of 11,000 protests a year”. The ways the Korean protesters vent their anger are also interesting. Here are some examples:

Flag burning is outlawed in , but this guy has a bright idea. To protest the visit of ’s Prime Minister Koizumi to the infamous Yasukuni Shrine in 2005, he decided to eat the Japanese flag. 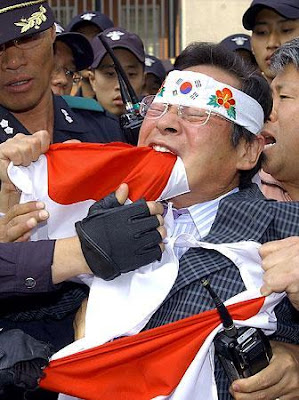 For some inexplicable reasons, South Koreans have protested against import of beef. This guy threw feces in a supermarket which sold beef. 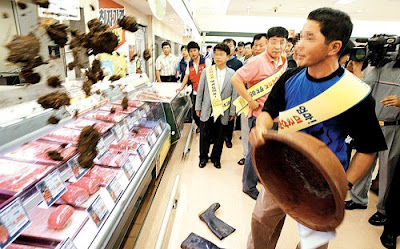 This is the most inhumane one. These demonstrators ripped apart a two-month-old piglet. author 陶傑, citing this incident, said that the Koreans were as barbarian as ever despite successfully holding the 1988 Olympics. (Click to enlarge the image.)

Just as Koreans who flock to undergo cosmetic surgery, it turns out that Korean drama is but a packaging which hides the ugly side of the people.

Posted by khengsiong at 2:16 AM