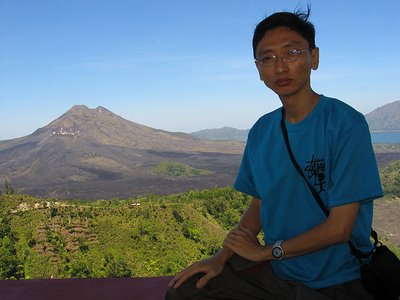 This is a photo of mine taken in Bali back in 2005 - about one month after the island was struck by terrorists. On the background is a magnificent valcano known as Gunung Batur (Mt. Batur). I requested a French tourist to take this picture for me.

People usually hold camera in horizontal position (landscape mode) when they take pictures. Additionally, they often place the 'subject' in the center of the frame. This is not always the best composition.

Back to the photo shown above. I asked the French man to compose the picture in a certain way. In turned out that he was a decent photographer and immediately understood what I wanted.

I also set the flash to On before passing the camera to the French man. If the flash was set to Auto, it would not have fired and the subject would be underexposed, i.e. dark.

How can this picture be improved? Well, the background is slightly overexposed, i.e. too bright. Many cameras have this function called Exposure Compensation or Exposure Value. Should I dial in a negative Exposure Value of say, -1/3, I would have got a better picture. I didn't retake the picture because I didn't want to give too much trouble to the kind French tourist.

Posted by khengsiong at 2:06 AM