After using a Nokia phone with very basic functionality for six years, I finally bought a Sony Ericsson K810i. I am still learning to use it, but will give my first impression of it here. 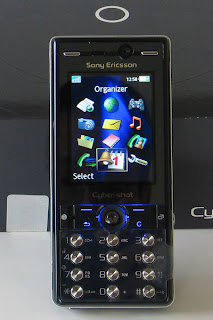 Among the Sony Ericsson phone users, am I the one who has largest hands?

My first gripe about Sony Ericsson K810 is its cluttered keypad. K810 has a much larger LCD screen than my old Nokia – nearly twice as large – yet the whole phone is shorter by a few mm. Can’t Sony Ericsson make the phone longer by a few mm, and give the extra space to the keypad?

There are a grand total of 21 keys on the front side of the phone. They are: left and right Photo keys, Internet key, left and right Selection keys, Navigation key, Activity Menu key, Back key, Clear key, 0-9, *, #.

When you are using the QWERTY keyboard, do you look at the keys before you type? The problem with Selection keys is that we have to look at the LCD screen before we now how to use them. This is cumbersome and counter-intuitive.

I also believe that, with a little bit of ingenuity, Back and Clear keys can be combined. Now, if Sony Ericsson also replaces the two Selection keys with a single key, the keypad would be less cluttered.

Before forming joint-venture with Sony, Ericsson made mobile phones under its own brand. Even until today, I still think that the now-discontinued Ericsson phones have the most intuitive interface.

The old Ericsson phones have just 16 keys – 0-9, *, #, two arrow keys, Call key and Clear key. Pressing either one of the arrow keys automatically brings you into the menu. Of course, this outdated interface no longer can handle the added functionalities of modern mobile phone, but its concept of simplicity remains useful.

I have one more gripe with the keypad of K810i. When I type a text message, I insert a space by pressing the # button, on the bottom right of the phone. This is a bit awkward, given that I hold the phone in my right hand.

In my old Nokia, I insert space by pressing the 0 button.

Posted by khengsiong at 1:29 AM

Email ThisBlogThis!Share to TwitterShare to FacebookShare to Pinterest
Labels: technology