A Lesson on Flash Photography

Many photographers avoid using flash when they shoot portrait. According to them, portraits taken with flash fired “don’t look natural”. But I am surprised that even some snap shooters have learned to distrust camera flash. Perhaps somebody had told them that flashed photos are bad, so they also turn off the flash when taking pictures, without knowing the tricks.


Last August, I attended graduation ceremony after I completed my MBA study. After the ceremony, my classmates and I took some group shots. For once, I wasn’t the photographer, but one of the subjects. A few days later, my classmates e-mailed the photos to me. I was disappointed, as most of the pictures didn’t turn out good…

The following is one bad shot. The picture is blurred due to handshaking problem. A check on the EXIF data reveals that “flash did not fire”. That’s exactly the cause. Had the flash been fired, we should have got a sharp picture. A flashed photo may be unnatural, but it is still better than a blurred one, right? 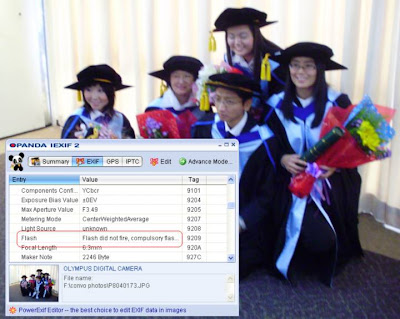 Now, you may ask me why a flashed photo is sharper than a flash-less one. The explanation is somewhat technical, and is not within the scope of this post. Just remember: flash helps to counter handshaking problem, thereby giving you a sharper picture. (Well, assuming that you don’t suffer from Parkinson syndrome.)

Here is another flash-less shot. This picture was taken with Canon EOS 550D, supposedly more advanced than my own camera. Furthermore, the lens had Image Stabilization, which helped to counter handshaking. Hence, unlike the first shot, this one is sharp. Nonetheless, I am still not satisfied, because the skin tones of the people look yellowish. (Remember that Asian women generally love fair skin?) Again, had the flash been fired, we would have got more accurate, or more appealing, skin tone. 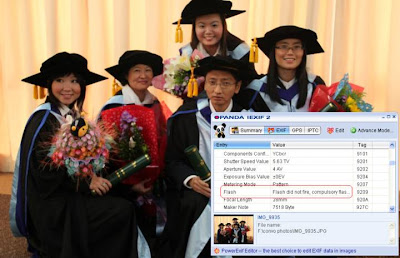 As a conclusion, don’t be misled into thinking that flashed portrait must be bad. If you haven’t learned the basics of photography, I suggest that you switch to auto mode and let the camera decide for you.