Last year, I joined a portrait photography event. At the end of the session, the model asked each of the photographers to add her as a friend on Facebook. I complied.

A few months later, I visited her Facebook page. She already had more than a thousand ‘friends’, and had reached the limit set by the social network. She opened a new account so that she could continue to add friends.

(I think Facebook has since raised the limit of friends a member can have.)

Probably because I uploaded some pictures of models to Facebook, a couple of young girls whom I never knew had wanted to befriend me. Should I confirm them as my friends?

I came to this conclusion: 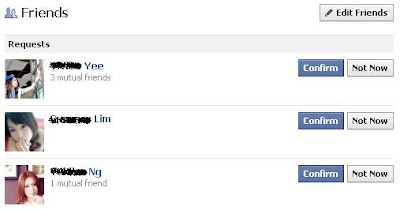 Posted by khengsiong at 9:05 PM