Green tea has gained popularity in the last decade. It is widely believed that regularly green tea drinkers may have lower chances of developing cancer. While green tea is produced in many countries, Japanese green tea is most famous. 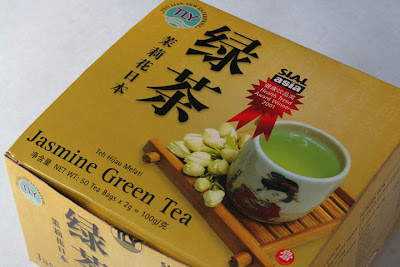 I have got a box of ‘tea bags’. As you can see from the packaging – shown above – the name of the product is Jasmine Green Tea. The two large Chinese characters 绿茶 mean ‘green tea’. The five smaller Chinese characters 茉莉花日本 mean ‘Jasmine flower ’. There is also a picture of Japanese cup.

However, when I read the label carefully, I soon realized that the tea was actually grown in , not . While Jasmine tea is considered a type of green tea, its color is actually more yellow than green, definitely not the same as what we see on the cover.

I can’t commend on the health benefits of Jasmine tea, but it is obvious that the producer is trying to cash in on the popularity of authentic Japanese green tea.

Posted by khengsiong at 8:08 PM