Fair or Not Fair

In the World Cup vs. match, Frank Lampard of had a goal disallowed. The incident re-ignited the debate over introducing technology to the game to aid referees in making crucial decision. Such technologies include Hawk-Eye, which uses cameras to detect whether the ball has crossed the line, or Cairos, which works on the same principle but uses electromagnetic sensors. Another alternative is to rely on video replay. FIFA has so far been resistant to technology, but it is increasingly under pressure following tons of blunders by the referees and linesmen in the tournament.

Most football fans support goal line technology or video replay, but there are some who have different viewpoints. A Malaysian photographer who went by the nickname rhizomegrass, for example, argued:

I don’t want [technology in football]…

Later nothing interesting is reported on paper. Everything is soooo perfect… Like this, at least I can talk for another 30 years about the blunder done…

In the quarter match between and , the Black Star had a great chance to score at the dying moment of the game. Uruguayan player Luis Suarez rescued his team by pushing the ball away with his hands, right in front of the goal line. (Note: Suarez was not the goalkeeper.) Suarez was giving matching order for his foul, and was awarded a penalty kick. Sadly, Ghanaian player Asamoah Gyan failed to convert the penalty. In the end, the Black Star crashed out.

It’s not fair! It’s cheating! would have won if not for Suarez’s deliberate handball. 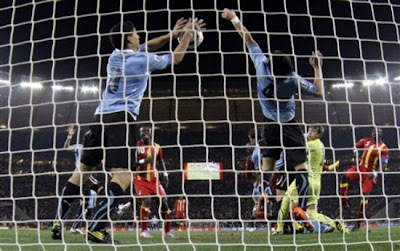 Posted by khengsiong at 8:27 PM

Email ThisBlogThis!Share to TwitterShare to FacebookShare to Pinterest
Labels: sports