Cemoro Lawang (sometimes written as Cemara Lawang) was the last settlement before Bromo-Tengger-Semeru National Park, the highlight of my Java trip. Many tourists spent the night here. Unfortunately, hotels in Cemoro Lawang were a bit pricey. As a traveler on a shoestring, I always tried to be kiamsiap (stingy). After doing research on the Web, I decided to book a room in Yoschi Hotel, a few km down the hill at Ngadisari.

Yoschi Hotel offered four types of accommodation: Economy Room, Standard Room, Deluxe Cottage and Family Cottage. I chose an Economy Room, at 104,000 Rp per night. The room did not have attached bathroom, but I could use the hot shower in the garden.

It is worth noting that October was considered low season in Yoschi, but high season in Cemoro Lawang’s hotels.

Here are some pictures of Yoschi Hotel: 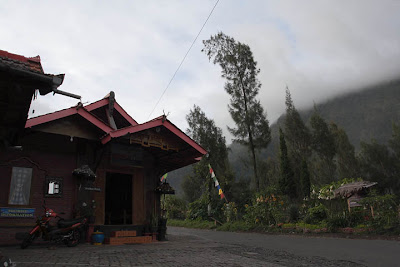 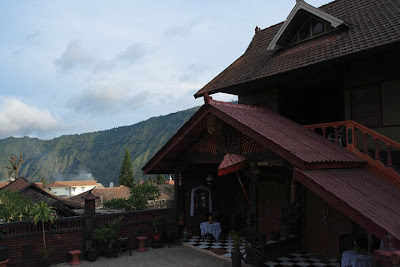 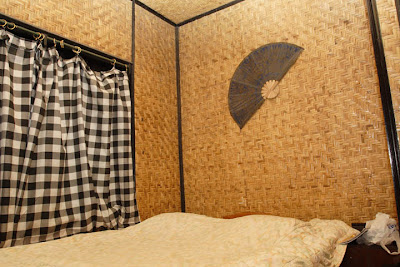 My dinner in the hotel – Steak with asparagus: 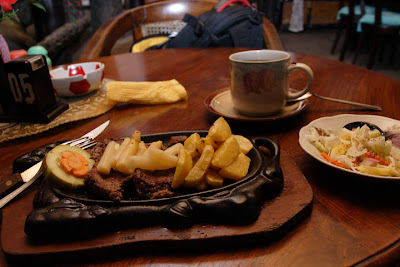 The location isn’t the most convenient: you can’t see Mt Bromo from Ngadisari; there were no wartel (shop for making long distance calls) nearby, and warnet (Internet shop) was 3km down the hill at Sukapura.

On the business side:

Yoschi’s rooms were relatively cheap, but it made money from side businesses, e.g. restaurant. Jackets were available for rental at 25,000 Rp each, and I bought a winter hat for 10,000 Rp.

Posted by khengsiong at 8:18 PM