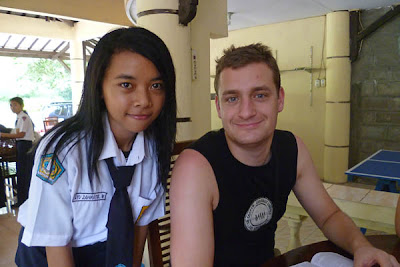 The Belgian tourist with an Indonesian student

I joined a package tour to Kawah Ijen immediately after the Bromo tour. There were a total of four participants – two Belgians, one Austrian, and me.

We stopped at a resto in Pantai Pasir Putih for lunch. As we were waiting for our food to be served, a group of students entered the premises and started to chat with the Westerners. It turned out that their teacher wanted them to practice their English with foreign tourists. (My Austrian tour mate told me that she had similar experience elsewhere in Indonesia. It looked like such practice was common throughout the island nation.)

But I was left fuming, “WTF, do you think I don’t speak English!??”

Posted by khengsiong at 9:22 PM