Hopping on the World Cup bandwagon: 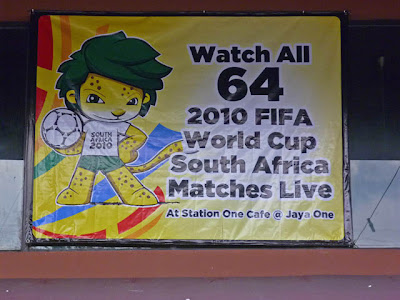 Inside a mamak store: 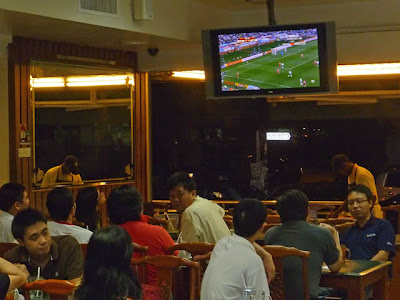 Not exactly a huge fan, but I have been following the matches of World Cup so that I have some topic to talk/write about. As I haven’t subscribed to Astro, I decided to watch the matches in mamak stores.

Since the tournament started, I went to mamak stores many times. There, I ate food which was very oily and spicy. I had also inhaled much cigarette smoke. I think World Cup is bad for my health…

is a sports giant. It is very strong in such events as table tennis, badminton, diving, swimming, weight-lifting and volleyball. The Middle Kingdom topped the Medal Table in Olympic 2008.

Football is hugely popular in . The country has the single largest audience in the world. Why do you think FIFA wants to play some of the World Cup matches at 1.30pm South African time, or 7.30pm time?

But the Dragon is absent in . In fact, has only qualified to World Cup finals once, back in 2002, when it lost all matches in group stage without scoring a goal.

Can someone please explain why the Middle Kingdom has persistently underachieved in football?

Posted by khengsiong at 8:48 PM