The other day I was jogging in the park. I saw a lady riding a bicycle, rather clumsily. She was possibly a learner. As she rode past me, I heard her screaming at her friend, “I don’t know how to step on the brake!” Her friend replied, “No, you don’t!”

Ah! Bicycle… I can’t remember when was the last time I rode one.

I grew up in a small town. As a student, I used to ride a bicycle to school. After finish high school, I attended a university in the nation’s capital. ’s clogged streets weren’t friendly to cyclists, so I got myself a motorcycle. At the same time, my little hometown got more motor vehicles each year. Today, it is no longer safe to ride a bicycle there.

is one cyclist-friendly city. There are lanes reserved for bicycles. Cities in also have bicycle lanes. Somehow, as Chinese get wealthier, more and more opt for cars. In fact, in the first quarter of 2009, leapfrogged the to become the world’s biggest car market.

In the past, cycling was a mode of transport. Now, it is just a sport. As we are concerned with global warming, air pollution, high oil price and personal health, should we not encourage more people to cycle? 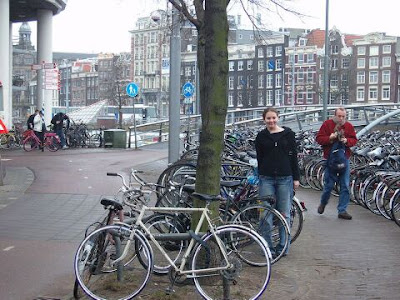 source
Posted by khengsiong at 3:43 AM