For those who do not know, Green Packet is the parent company of Packet One (P1), ’s first WiMAX service provider. (WiMAX is a wireless broadband Internet technology.) The CEO wanted to have an open, informal discussion with the bloggers. The invitation surprised me as I do not usually blog about technology. Anyway, since Mr Puan wished to ‘engage with the new media’, I am doing him a favor.

Puan was very ambitious. He wanted his WiMAX network to beat the nation’s ADSL service in terms of subscribers by the end of this year. His optimism was based on the fact that Malaysian market had been underserved. According to certain sources, there was only one broadband user to every five personal computers in Malaysia.

Puan also mentioned that Intel would roll out WiMAX chipset soon. PC equipped with WiMAX chipset would be available early next year, and P1 would be the ‘default service provider’ for . Intel, by the way, has invested in Green Packet.

I have no doubt that WiMAX-ready PC would be a big boost for P1, as we no longer need additional device such as USB modem to go online. However, I am skeptical of the claim that P1 would be the ‘default service provider’. Firstly, while Intel makes the chipset, computers are made by other companies. Secondly, if Intel practices ‘favoritism’, it would alienate other WiMAX operators. Would the chip giant do so?

In any case, P1 has provided the much-needed competition to the other Internet service providers (ISP). Consumers would be the ultimate winners.

CC Puan is the smiling guy on the left. He had H0N1 flu on that day so he did not drink beer. 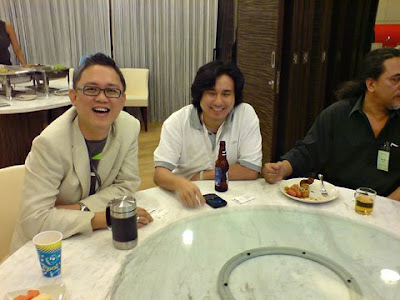