Question Marks over a Deadly Accident

Three teenagers aged 17-18, were killed in a road accident in Malaysia on Dec 7, 2010. The tragedy took place on a highway at around 3.30am in the morning.

According to witnesses, the driver, who died on the spot, was trying to make an illegal U-turn in the middle of the highway when their car was struck by another vehicle.

A few things crossed my mind when I read the news:

First, why was the driver making a U-turn on a highway? Didn’t he know it was illegal?

Second, the accident took place at 3.30 in the morning. Why were the three teenagers not at home by then?

Third, the driver was only 17 years old; he only got his driving license one month ago. (Other sources say a few months.) Was he too young to drive without adult supervision? His father defended him, saying that the teenager ‘had never had any accident record’.

According to another source, the young driver once threatened to not sit for exam, when the school wanted him to trim his hair. I suspect he was of rebellious type. If he had been driving recklessly, who was to be blamed? 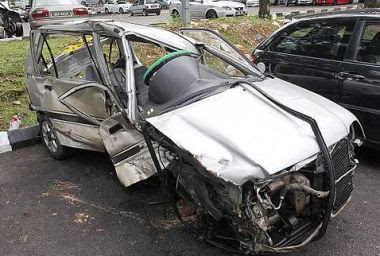 17-years old called home to say they would be late

Posted by khengsiong at 9:32 PM