I am a fairly lazy person.

Two years ago, when I was driving home from office along a highway, I talked to myself, “This is a good location to shoot light trails.”

Light trails photos, however, were best taken after 9.00pm, when it got dark and the traffic congestion eased. By then, I was too lazy to step out of my house again. Two years had passed. I didn’t make it, and had since worked for another employer.

Recently, after the grilling MBA exam was over, I was rather free. Finally, I forced myself to return to the highway to take these pictures… 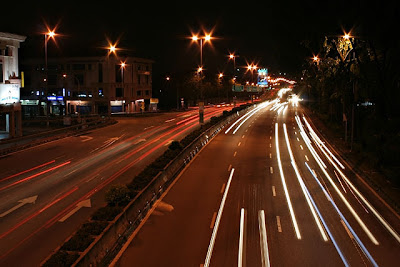 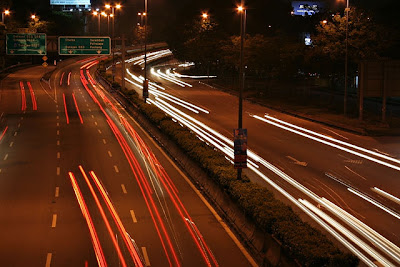 I have learned one thing from my MBA course mates: Don’t just think. Do it! 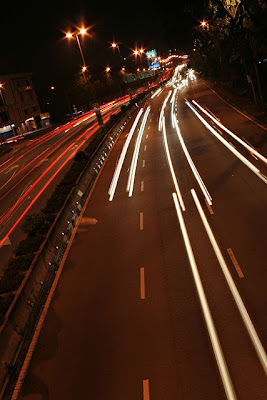 Enter the data in MS Project as shown: 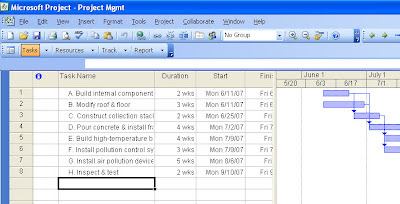 Posted by khengsiong at 3:04 PM No comments:

Russ Scaffede was the vice president of Powertrain for Toyota when it launched the first American powertrain plant in Georgetown, . He had worked decades for General Motors and had excellent reputation as a manufacturing guy who could get things done and worked well with people. He was excited about the opportunity to work for and to help start up a brand-new plant following state-of-the-art TPS principles. He worked day and night to get the plant up to the demanding standards of and to please his Japanese mentors, including Fujio Cho, who was president of Toyota Motor Corporation in .

Scaffede had learned the golden rule of automotive engine production: do not shut down the assembly plant! At General Motors, managers were judged by their ability to deliver the numbers. Get the job done no matter what – and that meant getting the engines to the assembly plant to keep it running. Too many engines, that was fine. Too few, that sent you to the unemployment line.

So when Cho remarked to Scaffede that he noticed he had not shut down the assembly plant once in a whole month, Scaffede perked up: “Yes sir, we had a great month, sir. I think you will be pleased to see more months like this.” Scaffede was shocked to hear from Cho:

“Russ-san, you do not understand. If you are not shutting down the assembly plant, it means that you have no problems. All manufacturing plants have problems. So you must be hiding your problems. Please take out some inventory so the problems surface. You will shut down the assembly plant, but you will also continue to solve your problems and make even better-quality engines more efficiently.”

When I interviewed Cho for this book, I asked him about differences in culture between what he experienced starting up the , , plant and managing plants in . He did not hesitate to note that his number-one problem was getting group leaders and team members to stop the assembly line. They assumed that if they stopped the line, they would be blamed for doing a bad job. Cho explained that it took several months to “re-educate” them that it was a necessity to stop the line if they want to continually improve the process. He had to go down to the shop floor every day, meet with his managers, and, when he noticed a reason to stop the line, encourage the team leaders to stop it.

From this short excerpt, we can learn quite a few of ’s business philosophies and operations practices.

First and foremost, we can see ’s emphasis on quality. In General Motors, managers avoided shutting down the assembly line because this would cause production to slow down. In , however, they were willing to sacrifice numbers for quality.

In most manufacturing plants, quality control inspection is usually done on finished goods. In , team leaders stopped the assembly line when they noticed a quality glitch, and fixed it immediately. They wanted to get quality right the first time.

The instruction to stop the line came from the team leaders, not the plant manager. This was another philosophy at work: employee empowerment.

Cho told Scaffede to “take out some inventory.” This is because inventory hides problems. When inventory level goes down, the problems are exposed. strives to lower inventory level as it adopts the Just-in-time (JIT) strategy.

Yield management is the planning process of allocating resources to customers at multiple prices in order to maximize yield, or revenue.

Yield management is practiced in aviation industry. An airline company alters ticket prices, in real time and on any route, based on demand information. If it looks like demand for expensive seats is low, more discounted seats are offered. If demand for full-fare seats is high, the number of discounted seats is reduced.

A hotel with 100 rooms has historically charged one set price for all its rooms: $150 per night. Sales average 60 rooms per night. 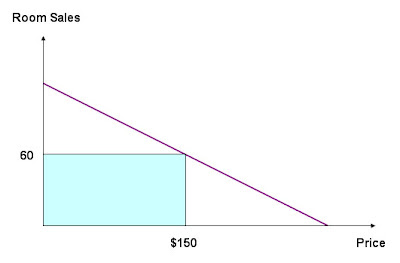 Now, this hotel decides to set two price levels. It estimates that 40 rooms can be sold at $100, and another 40 rooms at $200. Average revenue per night is worked out as follow: 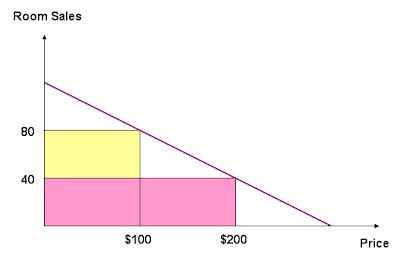 For the last 2 years, I have been reading posts in Internet photography forums regularly. I have learned, from the forums, some photography techniques, and got the news of latest gears.

Most of the major camera and lens makers are Japanese companies – Canon, Nikon, , Pentax, Sigma, Sony, Tamron etc. Their major contenders include Kodak of U.S., Samsung of South Korea, and the declining Leica of Germany.

Quite often, forum members ask such questions like “Is this camera made in ?” or “Is this lens made in ?” These people believe that products made in have better quality than those made in , , or .

In a world flooded with Chinese-made goods, Made in Japan has become a brand – a brand which, many believe, equates superior quality and gives us peace of mind. Japanese camera makers, like their counterparts in other industries, have set up plants in countries with cheaper labor or even outsource manufacturing to partners. Consumers, however, continue to choose products made in whenever possible. Even Hong Kong photographers prefer goods shipped from Japan to those manufactured in mainland !

Canon is probably one company which benefits from consumers’ penchant for goods made in . To be sure, Canon does have factories in many countries, but it has not shut down its facilities in . In fact, Canon announced in January 2006 that it would open a new plant in . The new plant would manufacture replacement lenses for digital single-lens reflex (DSLR) cameras. Canon may be making low-end cameras in or South-east Asia, but high-end, state-of-the-art DSLR and lenses continue to be churned out in the Sun.

Canon’s President Fujio Mitarai is known for questioning the wisdom of moving factories to . He said, “Wages may be cheaper in , but labor accounts for only about 10% of total production costs. Instead of rushing overseas to get those small savings, doesn’t it make more sense to focus on how to reduce the other 90%?”

Fujio Mitarai may seem stubborn, but his decision to not send jobs overseas was certainly welcomed by the fans of Made in Japan. 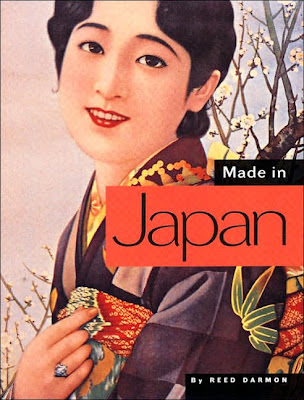 On Apr 28, 2007, my parents and sister came to . We had our dinner in a Japanese restaurant located in . There were 8 of us – my parents, sister, brother-in-law, two nephews, a Filipino maid and me.

There were a number of “dining cells” inside the restaurant. Each cell consisted of a table and two benches. The table and benches were not movable. Refer to diagram below… 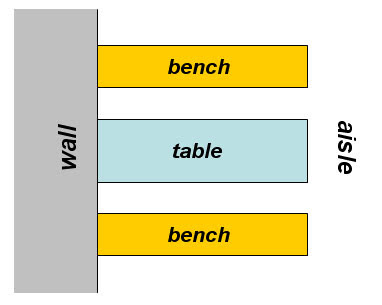 I saw a number of problems with this layout:

There were smaller cells with shorter benches. Each of these smaller cells fit four adult diners. Still, I found the layout and design inflexible. A group of seven or more diners may have to split into two. On the other hand, if all smaller cells are occupied, the next customers who come in will have to take up a big cell, even if there are only two of them. The result: waste of space. The Japanese restaurant was located in the so-called Golden Triangle of Kuala Lumpur, where land was expensive.

Don’t get me wrong. I wasn’t totally unhappy with my dining experience there. The food was oishii. But the Japanese restaurant may have lost some sales because of poor restaurant layout.

Fujio Mitarai is the President of Canon Corp. In an interview by Shukan Post, he gave his opinions regarding market research and product development...

For manufacturers, information on high technology theory obtained from academic associations is far more important. Based on such information, we can develop new products. Then we will advertise those new products to captivate consumers.

When new products are introduced, they will create new markets and eliminate old products. As you can see, 8-millimeter cameras, typewriters and word processors have all disappeared.

If any company decides to make products just by following others, they will never win. U.S. business leaders are suffering in this respect.

Posted by khengsiong at 2:23 AM No comments:

In Management Lite & Ezy 10, I touched on two types of supply chains – physically efficient and market responsive – as identified by Fisher. Jay Heizer and Barry Render expended his idea.

According to Heizer and Render, a firm can adopt one of three strategies – low-cost, responsive or differentiation. Each of these strategies requires different supply-chain management. Refer to table below. (Click for larger image.) 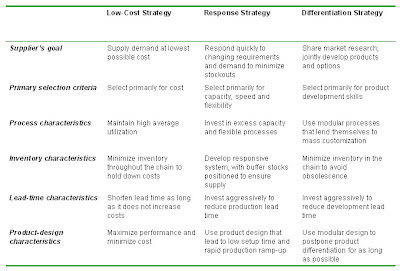 Posted by khengsiong at 7:49 PM No comments:

Chetawan Temple a.k.a Wat Chetawan is a Thai-style temple located in Petaling Jaya, Malaysia. On May 1, 2007, Buddhists thronged the temple to celebrate Wesak, the day which marks the birth, enlightenment and passing away of the Buddha.


Here are some photos taken there...


Ringing the bells for good luck... 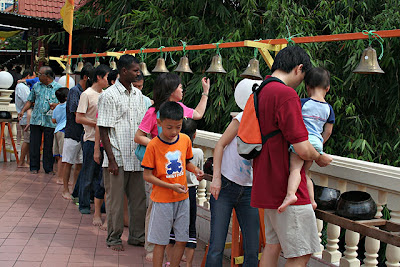 This devotee is not camera-shy... 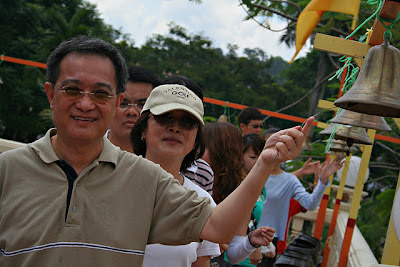 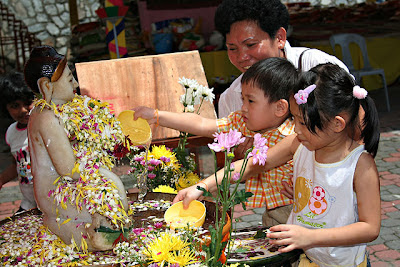 This young devotee is making offering... 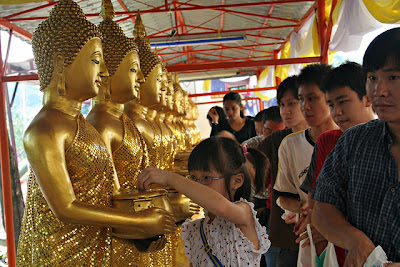