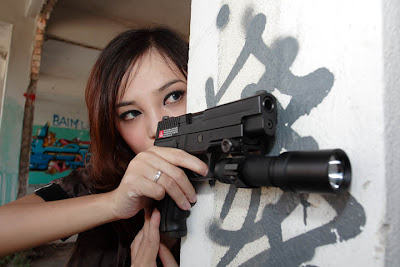 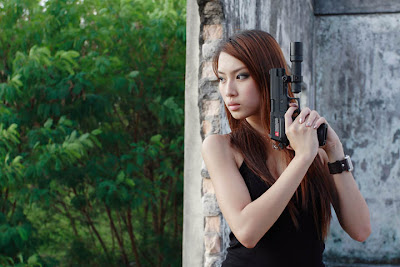 Justina catches her opponent off guard… 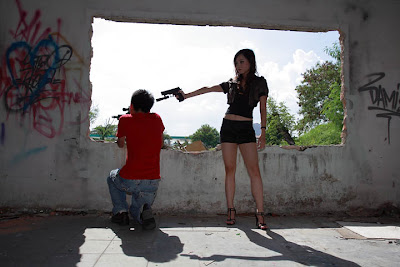 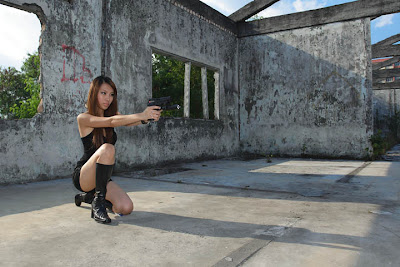 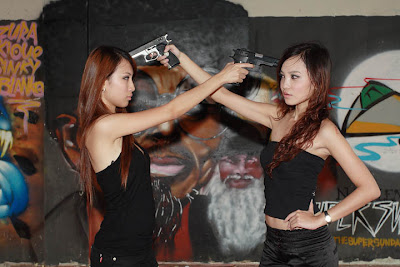 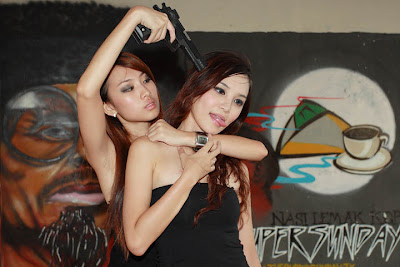 Earth Hour – Before & After 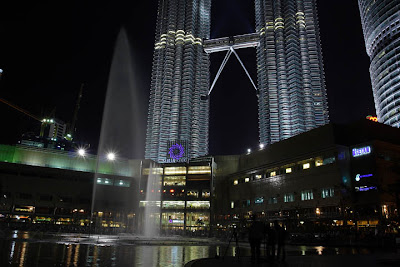 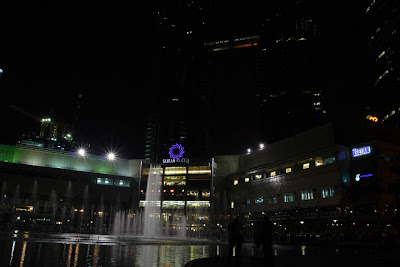 Note: I write this post in conjunction with the Earth Hour.

I am a person who is concerned with global warming, pollution, conservation of wildlife and forest, and other environmental issues. But at the same time, I am wary of environmentalists, for many of them are extremists.

I have been criticized by an environmentalist when I said I would not stop eating apple imported from other country. This same guy also saw air travel as an evil, and he was exhilarated when several airlines went bankrupt in 2008. (Never mind that many people lost their jobs.) And then there are these radicals from Sea Shepherd who attacked Japanese whalers with acid. But seriously, for any environmental program to succeed, we must balance it with development. You can’t talk to hungry people about nature.

National Geographic author Mel White certainly understand the importance of balancing environment with development. He expressed his utilitarian view in his article ’s Moment of Truth (Nov 2008 issue). Here is the excerpt:

Here is another dream. Along a dirt road in southern stands a one-room wooden house, with a few banana trees in the yard and a small vegetable garden in back. Beside the house a man kneels, washing a Yamaha Jupiter Z motorbike. It’s red, and it shines in the hot sun as the man rinses off the soap.

The man’s name is, let’s say, Pak Wang. With his new motorbike he can go to the closest village in a few minutes, instead of walking nearly an hour along the road. In the village he can meet his friends, buy things, go to the little karaoke bar, and watch television in his uncle’s restaurant. He can feel part of the world.

Pak Wang wants a mobile phone. Most of his friends have one, and if he had one it would be easier for him to make plans with them, to know where they will be on Sunday night, to meet the pretty woman named Unita who sells fruit at a street stand in town.

So, here is the message to the world. If we want to protect the forests of , to preserve a substantial part of its stupendous bio-diversity, to make sure that orangutans have places to make their nightly nests and hornbills have fruit to eat and flying frogs have trees to live in, there’s only one way to do it. We need to find a way for Pak Wang to buy his mobile phone. And, after he marries the pretty fruit-seller, a way for them to keep their children healthy and send them to school. A way that offers them a better future without having to turn their forests into plantations of oil palm or the sterile pits of strip mines.

And we need to do it while there’s still something left to protect.

As some of you already know, I plan to visit Java some time this year. A few weeks ago, I went to the Kinokuniya Bookstore in KLCC, where I bought a Lonely Planet guide for . I also browsed the Chinese section. To my surprise, with the exception of a few books on Bali, I didn’t see a single title for .

is a beautiful country full of adventures, yet most Malaysian tourists only go to and Danau Toba. I doubt many Taiwanese tourists have ventured out of the Hindu enclave. Why hasn’t the island nation become a popular tourist destination?

While there are many factors which explain the lack of interest in , I think bad press partially contributes to it. Ethnic and religious conflicts, bombings in Bali and , corruption, Syaria law in Aceh – you name it. All these, coupled with natural calamities, have had a negative impact on tourism.

Worse yet, probably because of poverty, some Indonesians like to cheat foreigners. This is how a member of Virtual Tourist describes the Javanese:

BE CAREFUL on the Probolinggo bus station. The [most unfriendly] people in the world live in Java and particularly in this town.

Back to my own country. is also plagued by bad press. There have also been quite a few ethnic and religious conflicts, such as the arson attack on churches recently. The state of Kelantan has for years banned the sale of alcohol, and imposed gender segregation in shops. A few years ago, a religious enforcement team raided a hotel to search for people who committed the khalwat offence, and in the process they harassed foreign tourists.

Of course, still enjoys a better image than , but can we be complacent?

Khalwat = proximity, where intimate contact is possible, between a male and female who have no marriage or kin relationship 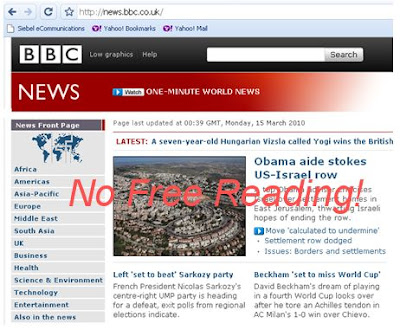 I like to read news online – even though I still buy newspaper. Some of my favorite news portals are BBC Online, Singapore-based Channel News Asia, and ’s The Star. However, in a few years, I may need to fork out some money in order to read the news on these sites.

Media heavyweights are mulling over plans to charge for news online. Rupert Murdoch’s Wall Street Journal online has already required its readers to pay a subscription fee. New York Times may follow suit in 2011. This may signal the beginning of the end of free online news.

The news media has good reason to charge for news online. They can’t make enough money from online ads, or so we are told. Will readers be willing to pay for full access to the news portals? This is certainly possible. After all, music fans have already been downloading MP3 music for a fee.

One possible impact of the news by subscription is that Web search may become less relevant. Google will give us results which we can’t read. How will the search giant respond?

In one of my posts, I mentioned that I was considering Irian Jaya as my backpacking destination.


Upon gathering information from the Web as well as from Lonely Planet, I understand that it will take three flights to get from to in Irian Jaya. Hassles aside, I think I will need quite a bit of extra money and time.

While I still haven’t given up on Irian Jaya, I am now considering two alternatives – both of them on the :

I may visit the two attractions in one single trip, but that will be a bit rush, as they are far apart. The itinerary I am considering is as follow:

If time doesn’t permit, I will visit just one of them.

Again, anyone who are familiar with Borobudur and/or please give your advice. Thanks.

Last December, unveiled the world’s fastest train on the newly opened Wuhan-Guangzhou line. Running at top speed of 350km/h, the train completed the journey from to – a distance of over 900km – in just 3 hours! 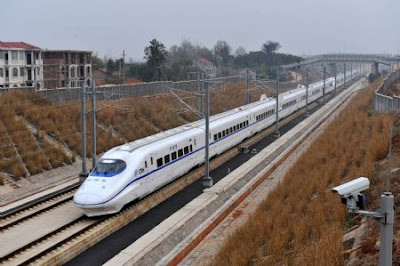 It should be noted that has worked together with foreign companies, most notably Kawasaki of Japan and Siemens of Germany, in building its high speed rail. The train which runs on Wuhan-Guangzhou line, for example, is based on Siemens’s model. However, has got technology transfer from its foreign partners. Sifang, the Chinese train-maker, modifies Siemens’s train and manufactures it locally.

There are many factors which affect the speed of a high speed rail, such as the train itself, the track, wear-and-tear, and noise pollution. Generally, the straighter the track, the faster a train can run. I think this is where has an edge over its competitors. While , can upgrade their trains, it is more difficult to upgrade the tracks which were laid decades ago.

has been experimenting with the Fastech 360 train for the last few years. As its name implies, the train was designed for a top speed of 360km/h. While this speed was reached easily during testing, the train has failed in terms of noise control. As a result, the ‘operational model’ of the train will only run at a commercial speed of 320km/h. As far as I know, Europe’s noise control standard isn’t as stringent as ’s. is probably more lax.

As a conclusion, I would say that ’s achievement in high speed rail is definitely astonishing. No doubt about that. However, this does not mean, technology-wise, the Middle Kingdom has left and in the dust.

P/S Beijing has proposed three international high speed rail lines linking China to Europe and South-East Asia. Presumably a passenger can travel from the Chinese capital to London or Singapore in 2 or 3 days. However, for journeys longer than 1000km, air travel is still more practical. 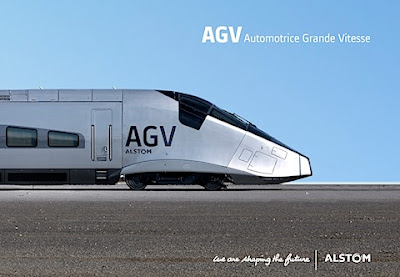 Fastech 360: The ‘cat-ears’ are used to slow down the train during emergency braking. 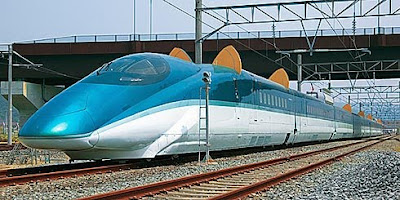 What are in your travel bags?

In my last trip to , I brought two bags – a big backpack and a smaller one. After checking into guesthouse, I left the big bag inside my room, and went out with the smaller bag.

What were in my small bag? Water bottle, travel guide books, and photo gears which included the DSLR plus lens and an external flash. Sometimes I also brought a jacket in it. In the next couple of days, I was weighed down by the things I carried…

Last year, my external flash, Canon 420EX started to act up. I purchase another flash – 580 EX II. The new flash is stronger, but also bigger and heavier. When I carried my gears to , Melaka, last January, my shoulders ached…

How should I reduce my load when I travel in future? Perhaps I can leave the 580EX II in hotel/guesthouse during the day, and instead rely on the camera’s built-in flash. Of course external flash is still preferred at night.

My bag, the Crumpler Sinking Barge, has think padding to protect the camera. Unfortunately, such padding adds to the weight, and the capacity of the bag is somewhat smaller than one might expect.

In the last few years, more and more people have owned DSLR. But seriously, if you are not concerned with image quality, and don’t bother to learn ISO, aperture, shutter speed, you probably should stick to pocket camera. It’s no fun walking around with gears weighing 1 kg.

So, what are in your travel bags? 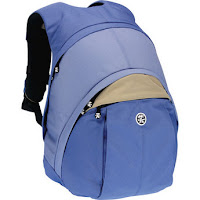 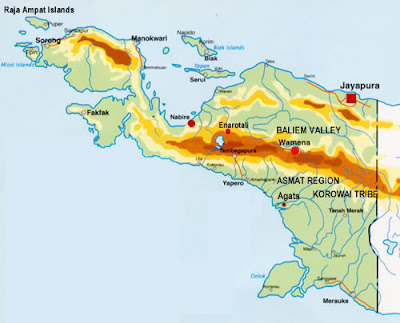 It has been while since I last had a backpacking trip. In the last few months I have been asking myself where my next destination would be. One possible option is: Irian Jaya.

Why Irian Jaya? Well, it is exotic. Despite being a of , geologically it is actually part of . Its aboriginal people have barely emerged from Stone Age. With a little of luck, I may even spot the gorgeous birds of paradise in their natural habitat.

But there are a number of challenges I have to overcome. This first question mark is: How to get there?

AFAIK, there are no direct flights from to Irian Jaya, so I need to make a connecting flight. Shall I transfer at , or some other airports? What airline shall I choose? As I am a poor traveler, I would like to keep the air fare as low as possible.

Can anyone in the blogosphere with knowledge of Irian Jaya please provide some advice? Your help is appreciated

Email ThisBlogThis!Share to TwitterShare to FacebookShare to Pinterest
Labels: travel