As a business student, I have learned that vision is important in mapping a company’s direction and ensuring future success. Many companies have their vision statements (in addition to mission statements).

A vision statement outlines what the organization wants to be, or how it wants the world in which it operates to be. In concentrates on the future. It is a source of inspiration. It provides clear-decision making criteria.

Likewise, the government of a country should have its vision. In 1980s, when the controversial Dr Mahathir was elected the prime minister, he had a vision to make a developed nation by 2020. The current Prime Minister Datuk Seri Najib paraphrases his own vision into two words – 1 . While his vision is a wholesome one, it comes four decades too late. experienced a bloody racial riot way back in 1969.

And the government is clueless about economy. In 1980s and early 1990s, transformed itself from an agrarian economy to a manufacturing one. In late 1990s, however, lost the edge to , which has since become the world’s factory. Until today, the country still hasn’t found a new economic model. Former Prime Minister Abdullah told us to ‘go back to farm’. Agriculture is not bad if we know how to do it the high-tech way. However, I am afraid our farms are not advanced enough.

If ’s leaders lack vision, their counterparts in are visionary. Take, for example, ’s bet on clean tech. The Middle Kingdom has the world’s fastest train running from . It is building the world’s largest solar power plant in . BYD, the Warren Buffet-backed car maker, was the first company to launch electric vehicles. ’s obsession with clean tech can be explained by the need to reduce pollution, but there are financial incentives too. is already an important solar panel exporting county, and it wants to be a leader in high speed rail and electric vehicles too.

Back to our country: is a tropical nation with ample sunlight. First Solar, the American company which builds the solar power plant in Inner Mongolia, has a factory in ’s Kulim Hi-tech Park. Why has the government not looked seriously into promoting solar power yet? 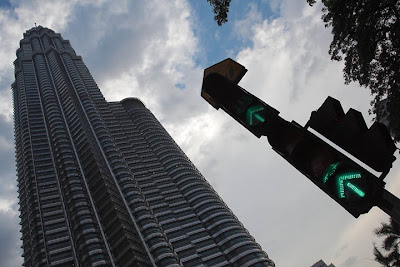 Above: The Way to Heaven

has some traffic lights which work in a ‘non-standard’ way. That is: the green light flashes a few times before the yellow light comes on.

Once upon a time, in the city of , the abusive police officers issued tickets to motorists who crossed a junction when the yellow light was lit. The obedient Malaysians accepted this as a valid traffic offence. Or they got off lightly by bribing the men in uniform. To help motorists escape fine, the Public Works Department of Malaysia devised a new traffic light system with flashing green light.

Actually, the Public Works Department can install two-set lights without the yellow lamp. That would lower the cost as well as reduce maintenance works. Isn’t that a brilliant idea?

One of ’s pop cultures which has gained popularity throughout is cosplay – short for costume play. Cosplay fans dress themselves like characters in manga, anime and computer games.

An offshoot of cosplay is cosplay cafés, in which waitresses often dress in French maid outfits. When patrons enter a ‘maid café’, the waitresses would greet them with “Okaerinasaimase goshujinsama”, which means “Welcome home, master!”

’s A87 Café & Bar is one cosplay restaurant which draws ideas from . Its waitresses dress in angel outfits rather than French maid outfits. The most interesting thing about this café is – for $1 per bite – you can be hand-fed by the waitresses! 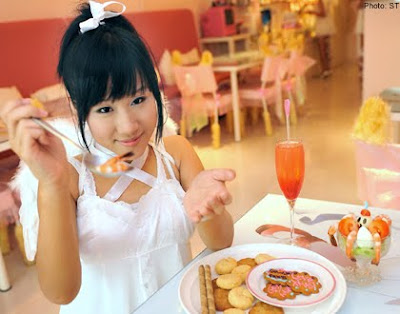 Photo by The Straits Time

I have learned that Starbucks doesn’t just sell coffee, or even service. Rather, it sells experience. A87 is another example of experience business.

I know, some of you would see this as gender-discrimination. I personally would feel uneasy being hand-fed…

Guys, do you like to be hand-fed by teenage angels? 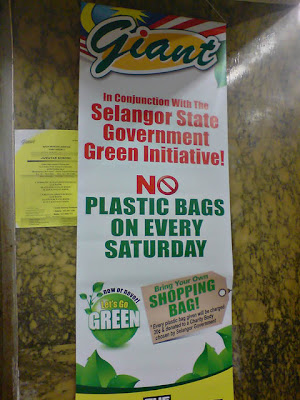 When I saw this banner in front of the Giant Supermarket near my house, I couldn’t stop laughing.

This supermarket used to disallowe its customers from bringing reusable shopping bags into its premises, presumably due to the concern of theft. That was, despite the fact it sold its own brand of reusable bags!

Came 2010, the state government of Selangor announced that every Saturday is ‘No Plastic Bag Day’. This store has no choice but to conform to the new rules…

My feeling has been mixed, though. While I always support using fewer plastic bags, I am not sure if a total ban – on Saturday – is too drastic. I think we still need plastic bags for vegetables and fruits… 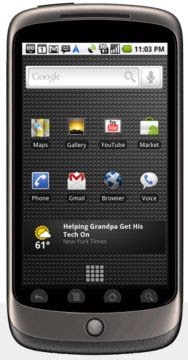 I went to on the first day of 2010. Last year, I flew to the island republic with Firefly. This time, I made a last-minute decision to travel. Hence, I had to drive.

There were two immigration buildings at the checkpoint – block 1 and 2. I drove through block 2. The immigration officer told me that the ‘road tax’ of my car had expired, and asked me to renew it at the office. I parked my car at the side and walked to the office, but found nobody working there. Thus I had to walk to the office in block 1. The officer in block 1, in turn, went to block 2 to check at my car! The whole process wasted 20 minutes. ’s government is known for its efficiency, but I had experienced its inefficient side!

After leaving the checkpoint, I continued my journey along PIE – Pan Island Expressway. I observed rows of rain trees on both sides of the road, and even ‘on’ the divider. Rain trees shaped like an umbrella, and were very shady. In this tropical nation, they helped to lower the temperature.

By comparison, driving along the North-South Expressway in on a sunny day can be uncomfortably hot...

I was reading a book written by Yolanda Chen, a Taiwanese woman who lived in . Her kids were studying in English schools in the Nordic nation. is famous for its education system. Finnish students persistently rank top in international exams. Finnish students do not wear uniform in school. According to Chen, this may have to do with the nation’s history. Uniform conjures up totalitarian rule of in the past.

Like their counterparts in , American students also do not wear uniform. , on the other hand, goes the other extreme. In the , even university students have to don uniform.

I am probably a bit conservative on this topic. I believe that uniform has certain benefits. Imagine this: a student from a well-off family – let’s say her name is Ann - goes to school in branded outfits, and shows off to her friends. Jealous of Ann, another girl – named April – returns home and tells her mother, “Mum, I want Guess jeans for my Christmas!” Such scenario is less likely to happen if uniform is a rule.

However, I do think that uniform is not suitable for tertiary institution. At their age, undergraduates should be given the freedom to express themselves through fashion. Of course, they should adhere to some forms of dress codes. Revealing dress is no-no in classrooms, and students should wear shoes inside laboratories.

So, what do you think? Should students wear uniform? 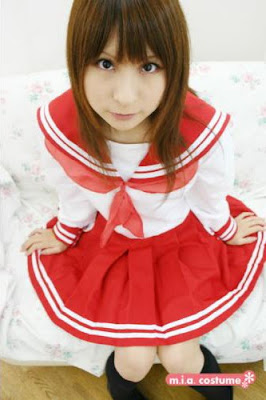