In one of my posts written last January, I mentioned that there were many ‘causes’ which Facebook members could join. I doubted their impact, though.

Recently, I came across a funny ‘cause’ on that social networking site:

Foundation for the protection of Swedish underwear models 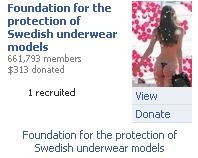 I have no idea what this foundation does. It has got more than half a million members. Money donated - $313! What a joke.

Rather than raising fund on Facebook, I would suggest that the foundation bring a few of these models to to perform on stage. More money can be raised. (Closed event, of course. This is a Muslim-majority nation.) I believe Malaysian shutterbugs would also like to photograph these models in lingerie.

Posted by khengsiong at 1:26 PM