The Storm over Copycat Remarks

A Malaysian professor, Dr Khoo Kay Kim, recently said that Chinese schools in the country have produced copycats through its rote-learning methods. As one might expect, angry Chinese Malaysians who are defensive of their ‘mother tongue’ lambasted him. One blogger wrote, “Khoo is a banana man. He is not in the position to criticize Chinese schools.” (Apparently the blogger wrote in Chinese. I do the translation.)

Well, I was educated in Chinese schools. Am I in the position to say a word or two on Chinese education system?

It is a known fact Chinese schools produce students who can hardly think independently and creatively. The Chinese-educated people condemned Dr Khoo simply because they wanted to defend their much-loved mother tongue. (The claim that Mandarin is the mother tongue of all Chinese is dubious in the first place.)

I am currently doing MBA. Many of my classmates were Chinese-educated. I have found that, even at this level, quite a few of them like to ‘copy and paste’ when it comes to doing their assignments.

To be fair, it is not just Chinese schools which churn out copycats. Most schools in do. Which is why Singaporean Kishore Mahbubani had written a book with the title Can Asians Think?.

I had a chance of working in several years ago. I remember a guy told me, “Americans have the tradition of challenging the authorities.” Such spirit is lacking in .

We should be courageous enough to acknowledge the shortcomings of our education systems, and take steps to rectify them. There is no need to be mad at Dr Khoo’s remarks simply because he doesn’t speak Mandarin. 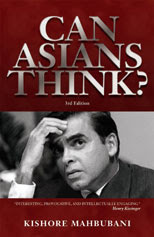 Posted by khengsiong at 2:20 PM