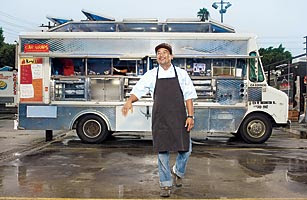 What can you do with Twitter, other than announcing to your followers what movies you watch and where you have your dinner?

American chef Roy Choi has found an ingenious use of the micro-blogging site. He sells Korean BBQ taco from his mobile kiosk – a truck. (Taco is originally a type of Mexican food, but Choi has added Korean touch to it.) He announces his whereabouts via Twitter alerts. (The End of ? Dream On!, Time Magazine, November 2, 2009 issue)

That’s a creative use of technology, isn’t it?