A Muslim clergy in Australia, Sheik Taj Din al-Hilali, caused outrage recently when he compared female rape victims who did not wear Islamic clothing to uncovered meat: “If you take uncovered meat and place it outside on the street… and the cats come and eat it… whose fault is it – the cat or the uncovered meat? The uncovered meat is the problem.”

As a person living in an Islamic state, I was not a little bit shocked when I learned of this story. After all, clergies and politicians in my own country often make sexist remarks. Just recently, a city council in Malaysia imposed a dress code ruling which it claimed would protect the women. Are women to be blamed for sexual misconduct of men? I have done a simple analysis to find out.

Before I proceed, it is good to explain the ethnic composition of Malaysians, just in case some readers are not clear. The majority ethnic of are the Malays, who make up nearly 60% of the population. Chinese and Indians are the second and third largest ethnic groups. The rest include non-Malay natives and some European descendents. The ethnic groups and their religions are given below:

· Malays – 100% Muslims as dictated in the constitution.

· Indians – Mostly Hindus. Some are Muslims, Sikhs and Christians.

· Others – Mostly Muslims and Christians.

My analysis is based on a report from World Health Organization (WHO). WHO got its data from the Royal Police of Malaysia. I re-produce three figures from this report here. 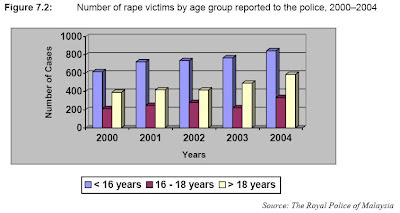 All Malays are Muslims. Nowadays Malay women dress very modestly. Most of them don headscarves. One would expect that they are less likely to fall prey to sex predators. WHO’s report shows the contrary. Malays made up nearly 70% of the rape victims, higher than their proportion in the population.

Next, we observe that large numbers of the rape victims were under 16 years of age, and 69% of the cases in 2004 took place at home or in a building. Some of you already can make a smart guess… Yes, incest is a serious problem in .

Sheik Taj Din al-Hilali of said, “If [the rape victim] was in her room, in her home, in her hijab, no problem would have occurred.” It turns out that, in , home is the most dangerous place!

Furthermore, rape cases are on the rise even though Malays have become more conservative.

It should be clear that holding women to be responsible for sexual violence won't solve the problem. Instead, men must learn to control their urge.

WHO Kobe Centre, National Report on Violence and Health – , 2006

Posted by khengsiong at 3:17 PM