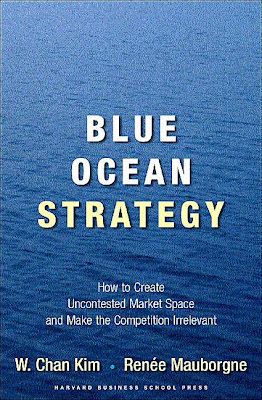 Strategy: How to Create Uncontested Market Space and Make Competition Irrelevant written by W. Chan Kim and Renée Mauborgne was one of the best sellers in year 2005. I haven’t read this book, but did come across photocopy of its Appendix A. I am not sure if I could agree with what I read.

In Appendix A, the authors examine auto industry. They write:

In the 1970s, the Japanese created a new blue ocean, challenging the automobile industry with small, efficient cars.

Back in 1970s, majority of American households already owned cars. The Japanese automakers, therefore, were competing in existing market rather than creating a new blue ocean. Sales of Japanese-branded vehicles rose steadily because of these reasons:

The third reason could readily be explained by older marketing models. Success of Toyota, on the other hand, can be explained by the famed Toyota Production System. The Japanese also moved up the value chain by selling luxury cars, e.g. Lexus by Toyota, Acura by Honda and Infiniti by Nissan.

Fast-forward to 1984. A beleaguered Chrysler, on the edge of bankruptcy, unveiled the minivan, creating a new blue ocean in the auto industry.

The success of the minivan ignited the sports utility vehicle (SUV) boom in the 1990s, which expanded the blue ocean Chrysler had unlocked.

Now, according to Kim and Mauborgne, a Blue Ocean Strategy involves BOTH differentiation and low cost. As we know, minivan and SUV are not cheap. The automakers were competing on differentiation but hardly low cost!

It is clear that the automakers mentioned above did not adopt Blue Ocean Strategy as claimed by the authors. They were, nonetheless, successful. My lecturer said, “Blue Ocean Strategy is one of the strategies, but it is not the best strategy.” I probably have to agree with him.

Posted by khengsiong at 7:33 PM