Malaysians are uneasy about demonstration.

On August 1, 2009, opposition parties of held an anti-ISA protest in the nation’s capital. Average Malaysians were quick to denounce it. (ISA is a law which permits the government to detain, in most cases, political opponents without trial for up to two years.)

Personally, I believe demonstrations should be allowed, so long as they are peaceful and do not greatly interrupt the living of the public. Unfortunately, in countries with limited freedom such as and , the police often provoke the protesters by cracking down on them. In the end, angry protesters retaliate and turn unruly, and the government would say, “You see, I told you protest is bad.”

is a country whereby demonstrations are deemed acceptable. In 1960s, hippies shocked with their Make Love, Not War protests. During Bush’s years, anti-war activists rallied against the President in his ranch in . The protest was led by Cindy Sheehan, a woman who lost his son in . I am sure many Malaysians supported the anti-war protest too. After all, didn’t we spot many car stickers which read Give Peace a Chance?

If you want true democracy, learn to tolerate demonstration. You can’t have freedom without chaos. 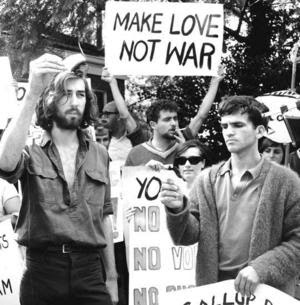 Posted by khengsiong at 1:24 PM