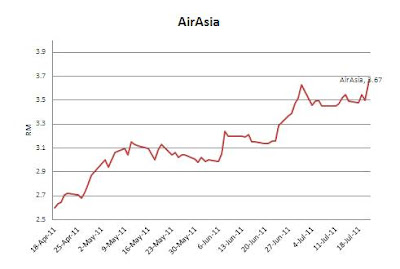 On July 21, 2011, AirAsia’s stock closed at RM3.67 in KL Stock Exchange. That was an increase of 17 sen, or about 4.8%, over the previous day. The intra-day high was RM3.70. When I noticed the price hike, I thought, “Are there some good news for AirAsia?” Then, on BBC news portal, I learned that the budget airline had just announced a joint venture with All Nippon Airways (ANA). That says it all…

AirAsia has had a 5-star performance in KLSE of late. I started to track its price since last April. On April 11, it closed at RM2.57. In just a few months, the price has increased by more than 40%! Sadly, I missed the boat and only purchased the stocks at RM3.22.

The budget airline group is expanding aggressively. This year alone, AirAsia has signed deals with Airbus to purchase 300 jets. But my concern is whether it will have money to pay dividend, given that it reinvest so much of its revenue into buying new jets. In fact, the company only declared dividend once, in 2010. AirAsia’s Debt/Equity Ratio was above 2.0 as of 1Q 2011, which was somewhat high.

As a stockholder, I hope AirAsia will do well. But as a potential flyer, I also hope that rivals such as Firefly will give it a run for its money. Kinda funny, isn’t it?

Posted by khengsiong at 8:17 PM