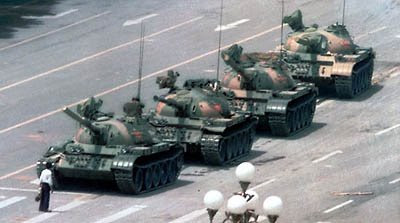 I didn’t have the intention to write about the 20th anniversary of Tiananmen Square Incident. Having observed that Chinese Malaysians care so much about it, I changed my mind.

In April, 1989, Hu Yaobang, former secretary general of Chinese Communist Party (CCP) died. University students of staged protest in , urging the government to push through political reform. Reformist leader Zhao Ziyang personally went to , where he persuaded the students to disperse. The students refuse to listen to him. Finally, supreme leader Deng Xiaoping ordered a crackdown on the demonstrator on the 4th of June.

Some political analysts point out that the students’ refusal to listen to Zhao was a mistake. If they left in time, no only would violence be avoided, but Zhao might be able to keep his post. (Zhao was sacked following the protest, and placed under home arrest until his death.)
Following the aftermath of the demonstration, stressed teaching of patriotism in school. Such teaching has produced a large numbers of ultra-nationalist youths who are skeptical of foreigners. The spectacular rise of the Middle Kingdom in the past few years has made it the world’s new super power. Even Chinese Malaysians feel proud of the achievement of their ancestors’ homeland. The issue is: The stronger is, the more difficult it is to challenge the authority of CCP. Democracy yearned by the protesting students in would remain a dream.

In fact, Mainland Chinese are so busy making money that they have lost interest in politics. Ironically, it is Chinese Malaysians who can’t let go of the ghost of the pro-democracy crackdown which took place 20 years ago. Aren’t we too busybody?

P/S Rather than commemorating the Tiananmen Square incident, Chinese Malaysians are urged to visit the ‘democracy tree’ in Ipoh. Perak, my home state, lags in development and needs your tourist money.

Posted by khengsiong at 3:28 AM