Following the news of several high profile cases in which Indonesian maids were abused by their Malaysian employers, threatens to prohibit its women from working as domestic servants in this country. Since then, there have been proposals by Malaysian officers to import maids from as replacement.

Maids from ? Are you kidding!?? How can the women from the world’s new super power work as domestic servants in a third world country? This is utterly ridiculous!

Imagine what will happen if Chinese maids are abused in :

The angry Chinese netizens would call for boycott of the department stores run by Malaysia-based Parkson Group, just as they did against French Carrefour last year. Chinese tourists would stop coming to this country. Our economy would suffer

Seriously, I am not in favor of the plan to hire Chinese maids. We must be careful to avoid angering the Dragon.

A waitress in ’s “maid café” 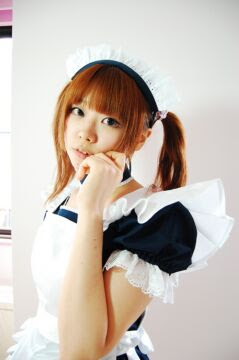 Posted by khengsiong at 3:46 AM