A decision tree is a graphical display of the decision process that indicates decision alternatives and their respective payoffs.

A company which manufactures car audio system is investigating the possibility of building a new plant. It has the options of either constructing a large of a small plant. The market for the product produced – car audio system – can be either favorable or unfavorable.

We will compute the Expected Monetary Value (EMV) for each alternative. The EMV for an alternative is given by the formula below:

A completed and solved decision tree is presented below: 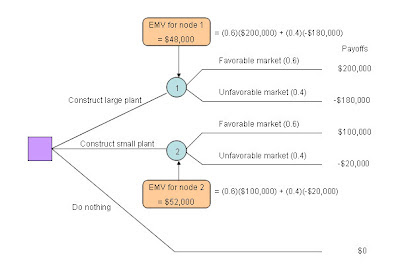 Based on the decision tree, a small plant should be built because it yields the highest EMV.

Posted by khengsiong at 4:21 AM