Santa Barbara, California-based company InTouch Health has developed a robot called RP-7 (RP for remote presence). This robot allows physicians to “project themselves to another location to move around, see, hear, talk and interact as though they were actually there”. 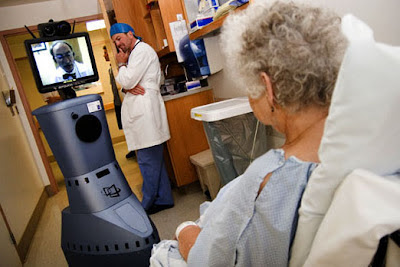 In the not-so-distant future, Asian doctors may be able to offer consultation service to their patients in the United States.

Watch out, American doctors! Your jobs could be offshored.

Posted by khengsiong at 3:13 PM