As I browsed through the “Houses for sales” section in the newspaper, I saw this mini ad:

But wait a minute. What, actually, is a bungalow?

Small house only one storey; (in ) such a house surrounded by a large verandah.

In , the word ‘bungalow’ has taken on a new meaning. It is used to denote a house which is neither terraced nor semi-detached. It can be single storey or multi-storey. More often than not, the word conjures up an image of a large and expensive house.

Much has been said about Malaysian English, or Manglish. We often ignore tenses and add particles of local languages such as lah, mah, lor. We may, for example, say:

I go to Malacca yesterday mah…

Such a sentence, while grammatically incorrect, is still able to convey the message. But the inappropriate use of ‘bungalow’ in this country is outright confusing. Even big property developers make this mistake in their advertisements. (Well, maybe they purposely do so.)

Can our Education Ministry please educate the people?

This is a bungalow. Or is it 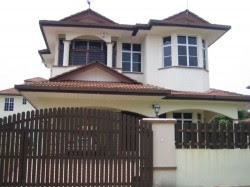 Posted by khengsiong at 1:18 AM