In my post dated July 29, 2009, I described my journey with Firefly, the self-styled “community airline”, from to .

How does it compared to AirAsia, the other Malaysia-based budget airline?

Both airlines suffer the same flight delay problem. However, the ATR 72-500 aircrafts used by Firefly has a capacity for just 72 passengers. Checking-in and boarding are brisk. In fact, you probably can check in 45 minutes before scheduled departure and still make it.

I hadn’t got a ruler with me, but my feeling is that Firefly’s planes have slightly larger legroom. (Can anyone commend on this?) Not to be forgotten, Firefly serves drinks and snacks free of charge!

So, can we ditch AirAsia?

Not yet. The leader in ’s budget market still wins in several areas. Airbus A320 jet planes in the fleet of AirAsia experience less shaking in the air when compared to the Firefly’s propeller planes. They are also slightly faster.

In fact, AirAsia and Firefly serve different markets. Firefly’s ATR 72-500 is probably not suitable for civilian flight over the . On the other hand, AirAsia’s A320, with 180 seats, are too big for smaller markets such as and Kuantan.

In short, both AirAsia and Firefly will co-exist, and we need both of them. As a person who grew up in Perak, I thank Firefly for linking the state with the . 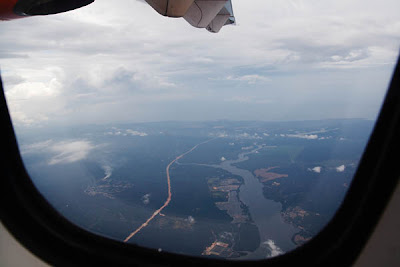 Posted by khengsiong at 2:39 AM