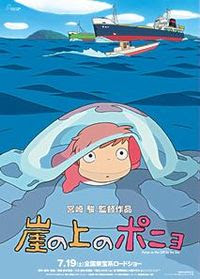 Walt Disney has just released the English version of Ponyo, the latest animated movie by Japanese anime guru Hayao Miyazaki. The original Japanese version of the movie (崖の上のポニョ) was released in the Land of the Rising Sun last year.

I am a fan of Hayao Miyazaki. His works, such as Princess Mononoke and Spirited Away (千と千尋の神隠し,), are highly acclaimed in . Somehow he has not been very successful in the American market. So far, the reviews of Ponyo by American movie critics have been mixed. Like all his earlier works, the pictures of Ponyo are hand-drawn, and 2-dimensional. In the era of computer-generated, 3D cartoons such as Shrek and Ice Age, ’s anime seem to be too old-fashion, and decidedly simple.

But it is exactly because of the simplicity that I like ’s works. If I want a 3D experience, I might as well watch a movie played by real actors/actresses!

I am running short of words to describe ’s works, so I will quote those of Richard Corliss, Time Magazine’s writer: His films proceed at a dream walker’s pace. They are not dialogue-heavy; they’re image-buoyant.

Yes, they are image-buoyant, if you are observant enough. The anime master has always had an eye for details. For the reasons just described, I believe his films are more for adults.

Have you watched Hayao Miyazaki’s films? How do you find them?