In one of my older posts, Sins of Recycling, I wrote that recycling might not be as green as many thought. An article, Where’s That Trash Going (IT14, The Star, December 4, 2007) provides more insight:

While there are no precise figures, activists estimate that 50% to 80% of the 300,000 to 400,000 tons of electronics collected for recycling in the each year ends up overseas.

Workers in countries such as , and then use hammers, gas burners and their bare hands to extract metals, glass and other recyclables, exposing themselves and the environment to a cocktail of toxic chemicals.

“It is being recycled, but it’s being recycled in the most horrific way you can imagine,” said Jim Puckettt of the Basel Action Network, the Seattle-based environmental group that tipped off authorities.

“We’re preserving our own environment, but contaminating the rest of the world.”

The idea of recycling is noble, but actual implementation proves to be difficult. We should really reduce and reuse before we recycle. 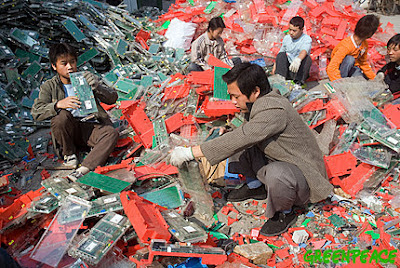 Posted by khengsiong at 3:11 AM