According to The Star, zoo officials were puzzled how the incident could have happened as there was a barrier that separated the visitors from the leopard’s enclosure. Director of the zoo had said that they would not compensate the victim. Most people interviewed by The Star believed that the girl’s parents, rather than the zoo, should be held responsible for the incident.

I haven’t been to Zoo Negara for years, but based on the photo published in The Star, I find the safety measures less than satisfactory. 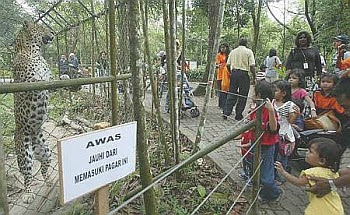 The so-called fence was merely made up of a few cables. Curious kids could easily get behind it and risk their safety. (Remember that the victim in this case was merely 5-year old.) There was a warning sign written in Malay. Given that there were foreign visitors to the zoo, one wonders why there weren’t any signs in English.

Had Zoo Negara done enough to protect the visitors? Could it escape from any liability by issuing warnings?

Let’s digress for a moment to the well-known McDonald’s coffee case. In 1992, Stella Liebeck, a 79-year-old woman from , purchased a cup of hot coffee from a McDonald’s drive-through window. She spilled the hot coffee in her lap when she tried to open the lid, and suffered third-degree burns.

In 1994, a juror in awarded Liebeck $2.9 million. McDonald’s lost the case even though their cups warned drinkers that the contents were hot. Jurors disagreed with McDonald’s, citing evidence that the fast food giant had not cool downed its coffee even after receiving many earlier complaints.

Now back to the Zoo Negara incident. Who were responsible, the girl’s parents or the zoo?

P/S The victim's parents insisted that the girl was clawed by a puma, not the leopard as reported by the zoo. Zoo officials, as mentioned earlier, were unclear how the incident could have happened. How could they immediately issue statements without investigating thoroughly?

Posted by khengsiong at 3:53 PM