Note: Football is known as soccer in .

Soccer is the world’s most popular sport, but it hasn’t quite caught on in the . Traditionally, ’s Big 3 sports are baseball, basketball, American football, while ice hockey can be considered number 4. However, many girls play soccer as they are excluded from American football.

Wanting to know why Americans are not interested in soccer, I browsed through the Web to search for an answer. Based on the info I have, Americans dislike soccer because of the following reasons:

It is true that goals are scarce in soccer. A match with one or no goal can really be boring. On the plus side, fans get excited every time the teams they support score. Too many goals can spoil the fun. 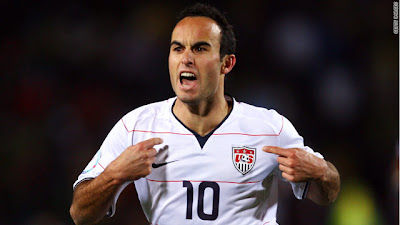 US Soccer Player London Donovan
Posted by khengsiong at 9:45 PM