It’s hard not to notice that Nintendo is targeting the mainstream. The company had made that message the focus of its annual game showcase last year, and this year’s event, on Oct. 10, was no different. Alongside its grey-on-white logo, Nintendo displayed towering ads showing trim, smiling kids and adults in different action poses while playing with the Wii video game console’s latest accessory, the Wii Fit board…

But this year [CEO] Iwata also took aim at a sector that Nintendo hasn’t had much success with lately: hard-core gamers. 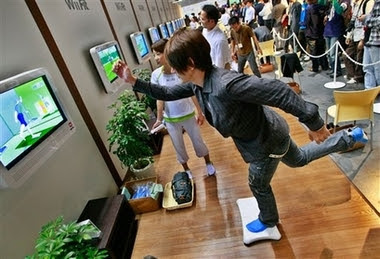 Since its launch, Nintendo has targeted the hugely popular Wii game console on casual gamers. This seems like a good idea: Nintendo can avoid direct competition with Sony and Microsoft, which sell PlayStation and Xbox, respectively, to hard-core gamers.

But I also remember the 80/20 Rule, which says that 80% of the sales come from 20% of the customers. In the game console market, these 20% customers are the hard-core gamers. Wii may be more popular among the rest of us than PlayStation than Xbox, but will it generate more revenue?

Perhaps this explains why Nintendo is changing its strategy. It is wooing hard-core gamers now, while at the same time trying to maintain the existing customer base, which consists of mainstream consumers.

P/S I personally am too lazy to play the “strategy games” enjoyed by hard-core games. I want to save my brain power for other purposes. Perhaps Wii’s motion-based games suit me better.

Posted by khengsiong at 2:51 PM

Email ThisBlogThis!Share to TwitterShare to FacebookShare to Pinterest
Labels: marketing