Blogger Lisa posted a few photos of beefy guys and sexy gals in her webpage, and she wrote:

Guys please avoid the hunk photos and girls enjoy the hunks and chicks.

Don’t be surprised if some guys like to look at the hunks photos.

You may be shocked to learn how many gays there are in the . Pollster Mark Penn writes:

Why does a man or a woman engage in homosexual behavior? Many believe that gay men and lesbians are shaped by the environment. Nonetheless, some people, especially the homosexuals, argue that a person’s sexual orientation is determined at birth. Christian Church, on the other hand, insists that homosexuality is a sinful lifestyle chosen by the individuals. In other words, God made them straight but they choose to be gay.

Now, if we assume that a person’s sexual orientation is indeed determined at birth and not chosen, there should be homosexuals everywhere in too. Of course, in this conservative society, most homosexuals would not disclose their sexual orientation. A gay man is still likely to marry a woman. Secretly, however, he may go fishing with another guy in Gunung Belakang Pecah.

Here is a question for you to ponder:

Should you support gay marriage/union?

If you are a homosexual, you answer is obvious. However, even if you are straight, you should still give an affirmative answer. If not, you run a risk of marrying one of them!

P/S Gunung Belakang Pecah is Malay for . This blogger is a straight man.

Brangelina vowed to not get married until gay marriage is legalized. 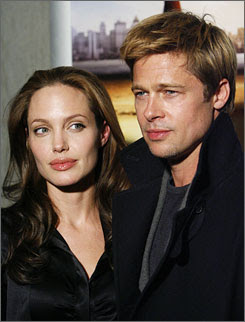 Wishing you a Happy Valentine's Day.

May you enjoy a very romantic candlelight dinner with your lover - same-sex or otherwise.

Posted by khengsiong at 1:59 AM