During the Chinese New Year of 2008, I traveled to . It reminded me of Mae Salong where I visited in January 2007.

of and Mae Salong in share many similarities: both are hill resorts; both are famous for tea production; Cameron Highlands is known for its flowers while Mae Salong is dotted with sakura in late December or January. But there is one aspect they differ significantly: is big; Mae Salong remains small, for now. 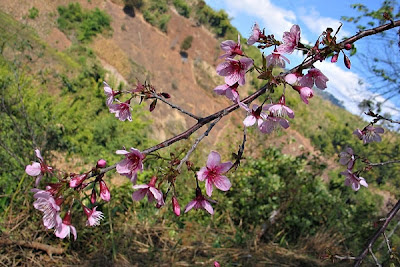 actually consists of several towns. They are, from north to south, Kampung Raja, Kuala Terla, Tringkap, Brinchang, Tanah Rata and Ringlet. Tanah Rata and Ringlet used to be the more developed towns. However, since the opening of a new access road in early 2000s, the other towns to the north are fast catching up. During my trip, I saw lots of constructions going on.

I believe is over-developed. Clearing up of forests for development has already caused the mercury to rise. Not to mention the dreaded gridlock during peak tourist season.

Mae Salong, on the other hand, still maintains a small town charm. Now I hope it will not make the same mistake as did.