Sex sells. In conjunction to the PC Fair held in on April 16-18, many exhibitors hired young girls to promote their products. Call them expo girls, booth babes or whatever, these pretty promoters had made the PC Fair more than just about technology.
Sony showing 3D technology in the PC Fair 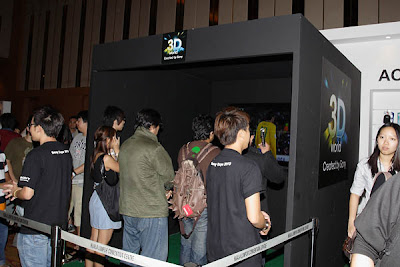 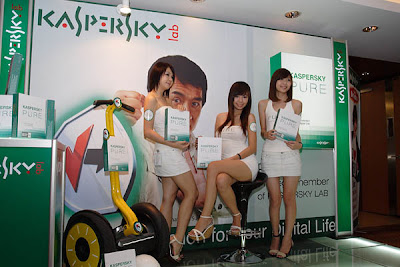 A rechargeable battery dealer had gone one step further in exploiting the sexual appeal of young promoters. Not only it had hired three pretty girls to attract customers, but it also organized a photo contest. Anyone who purchased any item from its booth was entitled to photograph the girls and participate in the contest. The dealer has listed down the rules of the contest as follow:

1. To enroll for the Grand Prize – buy any item from our booth

2. Take photos of our models posing with our E8GE products!

6. The top 62 photos with the highest number of “likes” win!

Now, if a photographer asks his friends to ‘like’ his photo, he is indirectly doing a marketing job for the products. (I’m assuming all participants are males.) What a brilliant idea! Unfortunately, I had less than 50 friends on Facebook. There was no way I could win the grand prize (a total of 2, with the remaining consolations).

One of the models for this contest was Rhea Lim, whom I photographed last year. I was surprised that she still recognized me. I bought four rechargeable batteries and a charger from the booth, but was nonetheless not interested in joining the contest.

This photo contest reminds me of another online contest held several years ago – The New Seven Wonders of the World. Even when the competition was going on, I already could predict the final results. had the largest number of Internet users in the world, and they were fiercely patriotic. They were called to support their own national treasure, and anyone who failed to do that would be condemned as traitor. As expected, the Great Wall got the most votes in this meaningless competition.

Posted by khengsiong at 1:09 PM