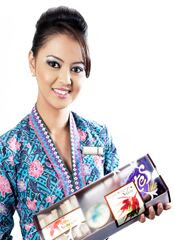 In July 2008, Malaysia Airlines (MAS) introduced hot meal in disposable boxes in selected flights. Prior to that, meal was served in plastic trays.

First of all, the boxes were nicely designed. Some passengers actually took them home as souvenirs. Second, I flew to Kota Kinabalu in Ramadan – Muslims’ fasting month. Muslim passengers could not eat during the flight but they could bring home the meal.

On the operation side, the airlines’ CEO reviewed that the use of disposable meal boxes had improved the aircraft turnaround time by five minutes.

Environmentalists are likely to be unhappy, though. Now I hope MAS could use recyclable materials for the box.

After flying with Air Asia – the budget airlines – a couple of times, I found the seats in MAS aircraft to be very spacious ^^.

Posted by khengsiong at 3:13 AM