Getting High in the Sky

Malaysia-based Air Asia is a no-frills airline. In an Air Asia flight, food and drinks are not served for free. A bottle of 500ml mineral water can easily set you back about RM4, or more than a US dollar.

By comparison, Malaysia Airlines (MAS) is a conventional, full service airline which includes the food and beverage charges in the ticket price. In long-haul flights, MAS even serves beer, wine, vodka and other alcoholic drinks. Since they are complementary, many passengers just drink as much as they could.

I believe full service airlines should consider to stop serving alcoholic drinks, or at least not without additional charge. There are a few reasons for doing so:

First, it helps airlines to cut cost, and the savings can be, and should be, passed on to the passengers.

Second, beer and wine, together with trolleys used to transport them, are heavy. Offloading them from the aircraft reduces its weight and thereby cuts fuel consumption.

Third, a drunken passenger can be a trouble-maker, even ground the plane. (Try google for “plane emergency landing drunk” and you’ll know what I mean.)

Fourth, as a teetotaler, I don’t like to “indirectly” foot the alcohol bills of other passengers.

There are many non-drinkers in the world. For a start, Muslims are prohibited to drink. Buddhists are Sikhs are also discouraged to do so, even though the rule, or precept, is never enforced. Even in the West, there are a growing number of teetotalers. U.S. President George W. Bush and his Treasury Secretary Henry Paulson are two examples. Finally, many people drink occasionally, but don’t see it as a must.

Travel writer Shann K (许彩平) is a former stewardess with MAS. In her book (飞同凡想), she writes:

Prior to landing, the passenger drank a lot of beer. As soon as the plane touched down, he unfastened his seat belt and wanted to go to the lavatory. The plane was still taxiing. For safety reason [co-worker] Owen stopped him from using the lavatory. Perhaps he no longer could wait, or perhaps he was too drunk, this guy leaned against a window and urinated there! Everyone else was stunned looking at him. 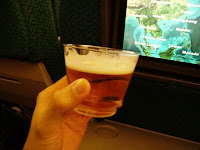 Posted by khengsiong at 9:30 AM