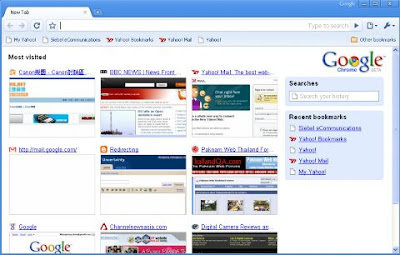 Much has been written about Google Chrome in the blogosphere. Most bloggers write about the new browser from the perspective of user. I, as an MBA student, will instead study the Chrome’s business case.

When Chrome was announced, the first thought which came into my mind was, “Why on earth does Google want to compete in the Web browser business?” After all, the Web giant had always been a staunch supporter of Firefox. Blogger, for example, worked better on Firefox – until version 3.0.1. (Read my gripes on Firefox 3.0.1 here.)

After some study, however, I started to feel that Google’s move might be a good one. I have been using Firefox since for quite some time now, but still find something lacking in it. For example, some sites load faster on Internet Explorer (IE). I don’t see how Firefox can unseat IE as the dominant Web browser. According to estimates by research firm Net Applications, IE is used by 74% of the surfers worldwide compared with 18% for Firefox.

Google’s ultimate motive is not to win the browser war, but to lure computer users to what we call cloud computing. Eric Schmidt, CEO of Google, explained, “… people started building powerful applications on top of browsers and the browsers that were out there, in particular [IE], were not up to the task of running complex applications.” Google creates many of those “online applications”.

So even if you are a fan of IE or Firefox, you may still need to resort to Chrome when you want to tap the power of cloud computing. Eventually, Microsoft and Mozilla will be forced to make their browsers better handle online applications. In whichever case, Eric Schmidt, Larry Page and Sergey Brin will be laughing.