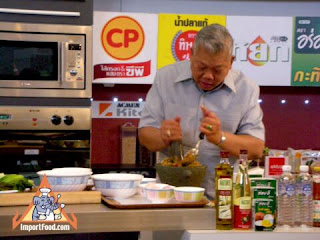 A Thai court ruled on September 9, 2008 that Samak violated the constitutional for accepting payment for hosting TV cooking shows. Samak received payments of up to 2,000 baht (US$58) for each taping, which he told the court he used to buy ingredients for his recipes and pay his driver for petrol.

Samak’s transgression was a relatively minor one, and purely technical in nature. It was not related to mismanagement or the leader’s integrity. I personally think that a monetary penalty of say 50,000 baht would suffice.

I am sure this tom yam coup will go down the history as a world-famous joke.

Posted by khengsiong at 2:23 AM